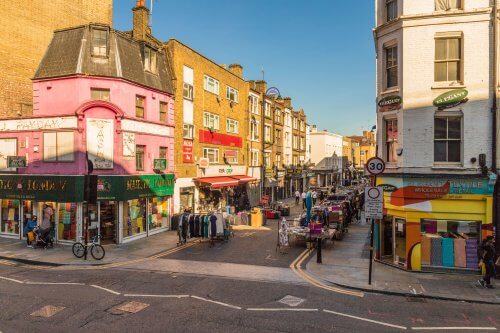 Markets are a great and long-standing tradition of shopping practice in London. Allow yourself the luxury of time to follow the flow of human movement and browse intuitively around the space. Once you’ve found the right market, that is! So where exactly is Petticoat Lane Market?

How do I get there?

That depends on where you’re starting from. The markets are clearly signposted from the surrounding tube and train stations. From Aldgate station, head towards Whitechapel High Street, and within a few hundred metres a left turning will take you onto Middlesex Street. From Liverpool Street, you’ll be able to see Middlesex Street over the main road, but it’s probably easier to cut down Catherine Wheel Alley. From Shoreditch High Street it’s realistically a bus ride. Jump on the 242 to Lolesworth Close and you’re only a couple of minutes from the turning into Wentworth Street.

Everything under the sun, really. The market has become known for its supply of leather goods – for which you should head to the Aldgate East end. Many visitors come with an eye to pick up some great end of the season and last season designer apparel. There are huge discounts on retail prices, so with a canny eye, you’ll find great pieces that will last even for the discerning fashionista. And a bit of bartering will always get you a bit more bang for your buck!

It’s not just clothing, though. With electronics, shoes, toys and bric-a-brac scattered around, there’s a full shopping experience to be enjoyed at Petticoat Lane market. The one thing you probably won’t actually find is the seventeenth-century petticoats and lace that made the market’s name in the first place. Although, you never know…

When is it open?

There’s a market all week long on Wentworth Street, but Sundays find stalls spread along Middlesex Street and around. It’s open from about 9am to 2pm. So once the stalls start to pack up, you’ll still have the afternoon to enjoy some R&R. And you’ll probably need it after all that winding through crowds and haggling with stallholders!

Getting to Apples and Pears

So how better to unwind after a Sunday morning market shopping spree than a couple of gentle cocktails? Apples and Pears Bar is now open on Sundays, which makes us the ideal destination to chill out away from the market hubbub. We’re about 5 minutes walk away. Just keep heading down Wentworth Street, crossing over Commercial Street and take a right where Brick Lane becomes Osborn Street. You’ll see us!

Within our haven of chill, you can browse in comfort through all your bargain designer goods in the knowledge that it’s been a successful day! And with laid back live music on hand, you can truly unwind and recharge for the week ahead.